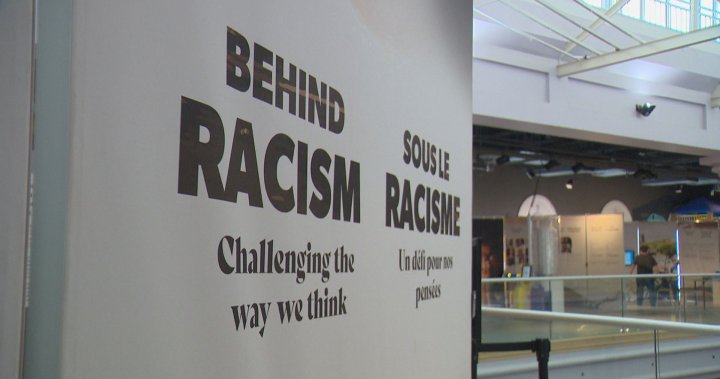 An exhibit to create space for conversations about racism opens in Sask. Science Center – Regina

An exhibit aimed at creating a space for conversations about racism opened Wednesday at the Saskatchewan Science Centre. “Behind Racism” offers visitors the opportunity to understand and learn about racism.

Regina residents head indoors for relief from the heat

“The exhibit does not attempt to explain racism through science in any way,” Holota said. “What it does is…encourage us to think about how we think. It actually goes into the roots of racism…it also talks about real stories of racism in Canada, both individual and systemic racism.

The story continues under the ad

The exhibit features hands-on interactive elements and touchscreen videos that will take visitors on a journey.

Visitors have access to the exhibit for a general admission fee to the Saskatchewan Science Centre.

The Regina Police Service (RPS) has partnered with the Saskatchewan Science Center to sponsor the exhibit. In a Tweet, RPS Chief Evan Bray said the interactive display provides a great opportunity for learning and dialogue.

“(Regina Police Department is) proud to sponsor this exhibit and create a space for this conversation,” Bray tweeted.

Holota said he received good feedback on the exhibit – people expressed their excitement as it creates an open discussion.

The story continues under the ad

“I think when we hear about racism, sometimes people worry that it’s going to be a bit preachy or they’re not really sure what the content will be,” he said. “He’s not there to tell us what we’re doing is right or tell us what we’re doing is wrong. It asks us to explore our thoughts and behaviors and just make sure we are aware of what they are and aware of what is going on in the communities around us.

The exhibition Behind Racism will be on view until April 2.

4:25
Taking a stand against hate and racism in Saskatoon’s Eastview neighborhood